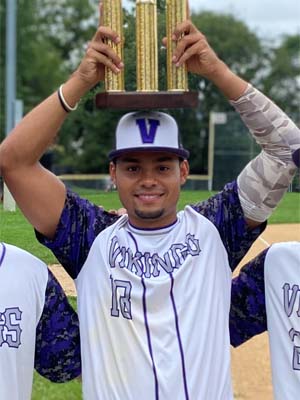 Brandon Colon is entering his second season coaching for the Rebels. He is a graduate of West Morris Central High School where he played baseball throughout. He went on to graduate from the County College of Morris with an Associate’s degree in applied science and has recently graduated from The College of New Jersey with a bachelors in health and exercise science and a minor in psychology. Soon after, he went on to become a certified exercise physiologist which he works as during the day at a physical therapy clinic. In addition to that, he is a coach at USA Sport Group where he coaches multiple sports for younger athletes and has been a swim instructor/lifeguard for over 5 years at North Jersey Aquatics Club.

Brandon is a long-time friend/teammate of coach Andrew Mount and given the fact that they grew up playing together (and still do to this day), they have adopted a similar mindset that defense wins championships and little things like running bases and bunting are keys to success on the diamond. Brandon is eager to start his second season coaching with the Rebels and is looking forward to helping get the most out of his players in all aspects of the game.