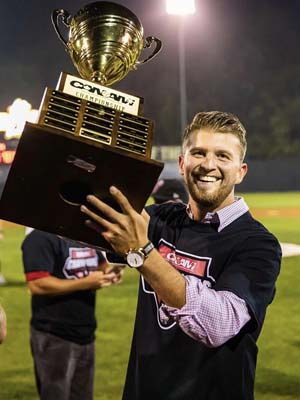 Gil Addeo is in his second season coaching for the Rebels, 13U Blue team. Previously coaching two seasons with the Montclair Bulldogs, Nike Baseball Summer camps and running TAP programs, (Total Athlete Performance). Addeo, a 2015 graduate of Washington Township High School where he played 1st base for the Minutemen, and continued his baseball career at Montclair State as a 2019 graduate.

Gil Addeo now serves as the New Jersey Jackals General Manager, a professional Minor League team within the Frontier League. Addeo is excited and looking forward to the upcoming season and is anticipating a successful year and hopes to help the team bring home yet another championship as the Jackals are the 2019 league champions.

Coach Addeo believes in the importance of player development and is committed to providing the Rebels with the guidance, skills and instruction he believes the players need to succeed now, in the future at the High School level and beyond.