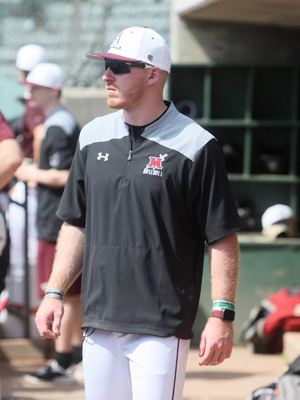 Coach Maugeri currently is inhis second season as a Volunteer Assistant Coach at County College of Morris, where he works with the hitters and outfielders. He mentored Jake Hall, a 2nd team NJCAA All American selection in 2019 at CCM and has already seen 3 of his former players go on to play Division 1 baseball. Coach Maugeri began his college career at CCM, where he was a first team all GSAC Outfielder in 2015 and First team All-Region XIX Outfielder in 2016, while also serving as team captain.

He transferred to Ramapo College where he graduated with a BS in Accounting in 2018. He served as a team captain in 2018, while leading the team in batting average and earning honorable mention all NJAC. Coach Maugeri was tied for 1st in the nation in triples in 2018 with 9, which also set the single season record for Ramapo College. He was a 3-year Varsity player at Roxbury High School, winning a Morris County Tournament Championship and Group IV Sectional Championship as a senior, capturing 1st team All-State Group IV honors while leading the team in hitting.